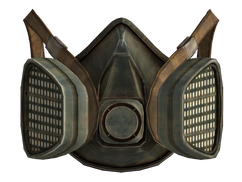 Ulysses' mask is a piece of headwear in the Fallout: New Vegas add-on Lonesome Road.

This face mask is designed to protect the wearer from environmental hazards. It also provides more standard defense, giving +3 to Damage Threshold.

It functions as an improved breathing mask, providing +50 radiation resistance compared to the +5 bonus given by the standard variant.

When Ulysses is encountered in the Divide, he will be wearing this mask along with his duster.

Retrieved from "https://fallout.fandom.com/wiki/Ulysses%27_mask?oldid=2992346"
Community content is available under CC-BY-SA unless otherwise noted.