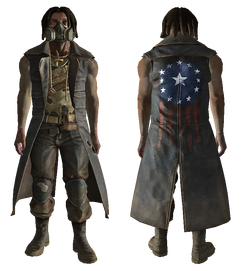 Ulysses' duster is a piece of clothing in the Fallout: New Vegas add-on Lonesome Road.

Ulysses' duster is a sleeveless black coat emblazoned with the United States commonwealth flag; the thirteen stars representing the commonwealth states. The rest of the outfit consists of a shirt, black pants, and a pair of black boots. There are several accessories, including a pair of tribal-like necklaces, a bandoleer, and kneepads. The entire outfit is dusty and weather-beaten.

When Ulysses is encountered in the Divide, he will be wearing this outfit and Ulysses' mask.