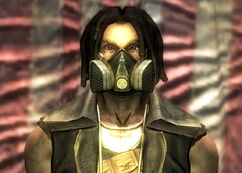 The Job
The Courier 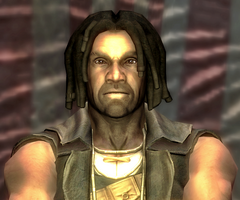 Ulysses without his breathing mask

“Burn away the flags. Begin again.”

Ulysses is a courier and former frumentarius of Caesar's Legion. In 2281, he was one of six couriers hired by Victor to carry strange packages to the Strip North Gate, but his delivery was left to the Courier after Ulysses' mysterious disappearance. He serves as the main antagonist of Lonesome Road.

Ulysses was once a member of the Twisted Hairs, a powerful tribe in Arizona that forged an alliance with the fledgling Caesar's Legion in 2247, becoming its scouts during the conquest of Arizona. Ulysses was one of the most successful scouts in the Twisted Hairs, traveling vast distances in search of the enemies of both Caesar's Legion and the Twisted Hairs. However, once the Legion's campaign ended in Arizona, Caesar promptly rewarded their aid by breaking the alliance and betraying them: conquering and enslaving them as he had done to all the other tribes of Arizona. Their tribal identity was erased, and those who resisted were crucified along the sides of I-40.

Vulpes Inculta's pacification of Dry Wells was a particularly painful moment for Ulysses, though his dedication to Caesar and the flag of the Bull prevented his desertion.[1]Thanks to his ability and his forceful personality, he quickly became an important, indispensable frumentarius of Caesar's Legion, walking the wastes as a courier. Caesar told him to kill no other member of this profession since many couriers were, in fact, members of the Legion. In 2274, after the NCR reached Hoover Dam, Ulysses crossed the Colorado River and was the first among the Legion to see both the Dam and the NCR: a nation great enough to challenge Caesar. Returning across the Colorado River, Ulysses went back to Caesar and spoke with him about Hoover Dam and the NCR. This Old World symbol became an object of obsession for Caesar, a great symbol to focus his people on. Ulysses, however, believed Hoover Dam might be the death of the Legion, whether they won or lost.

Ulysses continued to walk the wastes, exploring the wastelands for Caesar. Between 2274 and 2277, Ulysses discovered a prosperous community: "The Divide", which was, in his own words, "a nation taking its first breath," surrounded and shaped by the symbols of the Old World. Ulysses believed this place had the potential to become a homeland for him, and a second chance, a new way of thinking outside of the rigid discipline of the Legion.[2] To Ulysses' dismay, the prosperous community was discovered and annexed by NCR, which drew the attention of Caesar, who sent in a small army to conquer it and cut the NCR's supply line to the Mojave and Hoover Dam.[3] Ulysses had tentative plans to save the community, but, before he could act, the Courier, hired by the NCR, brought a package containing a mysterious device from Navarro, before departing.[4]

Ulysses was fascinated by the package, bearing the sigil of pre-War America, but also one he had never seen before. This device turned out to be a messenger of destruction: someone activated the device, which began "speaking" and activated several of the nuclear warheads still underground in their silos since the Great War.[5]The results were immediate and devastating; deep below Hopeville and Ashton, the warheads' detonations shook the land, destroyed the settlement and killed most of the NCR and Legion soldiers.

This disaster nearly killed Ulysses, but he was saved by several medical eyebots, who had also been activated when the package was turned on; he speculated that this was because they had recognized the flag of America on his back, believing him to be a pre-war US soldier. Ulysses' life was changed that day, which showed him how a single individual could change history, or erase it. As a survivor of the Divide, he held the Courier responsible for the destruction of the place that he believed could have been his true home, "larger than the Bear, greater than the Bull."[6] At the same time, it inspired him. In 2277, he returned to Caesar, learning that the First Battle of Hoover Dam ended in the defeat of Caesar's Legion.

Caesar sent Ulysses to the Great Salt Lake as his emissary, to rally the White Legs against New Canaan and watch over them as they undertook Caesar's test: to cut off the NCR supply lines running through Utah, and to destroy New Canaan, killing the still-living Joshua Graham along with it.[7][8] He became their mentor; the White Legs called him the "Flag-Bearer" for the flag staff he carried.[9] He taught them the values ​of the Legion, showed them numerous supply caches and bunkers hidden across Utah (like Spanish Fork) that gave them the weapons that they became known for, all the while lying about Caesar's pride in those who used such weapons.[10] The act of deceit posed some problems in his mind; he compared himself to Vulpes Inculta, the man who had betrayed his former tribe.[11] He was an inspiring presence, but not in the way he wanted to be; the White Legs began to honor him instead of the Legion. After the plundering of New Canaan, he observed that the White Legs began to braid their hair into dreadlocks, as he did. For them, it was a sign of respect for their mentor; for Ulysses, it was a hollow mockery of the ways of his destroyed tribe, the Twisted Hairs, because the significance of the braids was completely unknown to the White Legs.[12] But even then, the braids reminded him of who he was and forced him to realize what he had become.[13]

Shortly after the destruction of New Canaan, Ulysses finished his duties to Caesar and left the White Legs to their own devices. He set out looking for ways to change history himself, and find a way to reawaken America, seeing it as having peaceful yet strong places like the Divide before its destruction, and thinking that the NCR and the Caesar's Legion had no long-term answer for the future of humanity. He retired to Wolfhorn ranch for a time, to collect his thoughts, appearing to be a successful bighorner rancher [14] and roaming, sometimes as a courier.

Sometime later, during his mission to reawaken America, he found Big MT by following the weather patterns, knowing the Divide's storms were caused by man, not nature. He tracked it like following a river current, leaving painted emblems matching the flag on his back in case he lost his way, or as a trail for any who might follow, like the Courier. Ulysses finally came to the crater, where he found the Old World facility and the X-17 meteorological station still active.

While there, he was caught up in the conflict between Knight Royce of the Circle of Steel and Father Elijah. At some point, after Elijah spoke with the Think Tank, Ulysses and Elijah made contact. He directed the rogue elder to the Sierra Madre, apparently knowing it would eventually become Elijah's grave.[15] Ulysses would then rescue Royce from the Y-17 medical facility, nursing her back to health in a nearby cave.[16] From Christine, he learned more about the Brotherhood of Steel, enough to decide the Brotherhood was not able to forge the future he wanted to live in. In payment, Christine gave him an old recorder she had managed to repair, which he used to record the logs he left scattered across the Divide.

Ulysses spoke with the Think Tank, specifically Doctor Klein, who recalls him as a melancholy fellow who asked a lot about history. Ulysses also spoke with Doctor Mobius. While at the Big Empty, he questioned the Think Tank: "Who are you, that do not know your history?" This question caused them to awaken and remember that, for a time, America, the flag of which was displayed on Ulysses' back, was not just a flag, but a place, an idea that they had cared for once before. After this awakening, the Think Tank told him what "still carries America's voice," deep in the heart of the Divide: the "Divide giants" - nuclear missile silos scattered across the ravaged landscape and the device still there to activate them.[17] Whether by their own hand or Mobius', the Think Tank's memory of Ulysses' question was later erased, to perpetuate their stay in Big MT. Ulysses departed, deciding to reshape the post-apocalyptic world single-handedly, much like the Courier reshaped the Divide.

In 2281, Ulysses was hired by Victor to carry the platinum chip to the Strip's North Gate. He came to Primm at the Mojave Express to receive the delivery order and was about to accept the job until he saw the Courier's name on the list. He decided to allow the next courier to take the job, telling Johnson Nash to "let Courier Six carry the package."

Eventually, Ulysses broadcasted a simple message intended for the Courier: the coordinates for the canyon wreckage west of Primm, and taunting graffiti meant for them.

Ulysses' dual obsessions with the Courier and the Divide are motivated by several factors. He is the only unmutated survivor of the disaster at the Divide, and because he believed it was the Courier who caused the destruction of the community. Ulysses understands the impact a single person can have on history, even if the Courier is unaware of their involvement in the event. Chris Avellone commented to this effect before the release of Lonesome Road:

“I also have a lot of love for Ulysses in Fallout, only because I like the idea of someone hunting my player for reasons of his own, and then hearing the reasons why… and realizing how important even the smallest of my actions are for the people of the wasteland – living or dead.”— Chris Avellone[18]

Ulysses waiting for the Courier in his temple

Ulysses observing the Divide near the remains of Hopeville

A night view of his observation

Ulysses spying on the player from the Sunstone Tower roof

Ulysses spying on the player from The Crow's Nest

Ulysses in an endings slide

Dead Ulysses
Add an image to this gallery

Retrieved from "https://fallout.fandom.com/wiki/Ulysses?oldid=3286458"
Community content is available under CC-BY-SA unless otherwise noted.