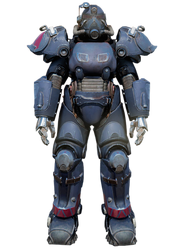 The Ultracite power armor was developed by the Brotherhood of Steel after the Great War, by heavily modifying the design of the standard T-51 power armor. The use of ultracite as a key material for the armor allowing for additional armor plating and radiation shielding, at the cost of increased strain on the suit's cooling systems. Primarily developed by the Lost Hills chapter, the plans allowing such modifications were transmitted to the organization's Appalachia chapter by Scribe Hailey Takano. When reviewed by the Appalachian scribes, it was discovered that the suit's schematics had a flaw in its cooling system, which would cause constant leaking if implemented. Scribe Grant McNamara managed to rectify these problems and sent the updated design to Paladin Taggerdy for review.[1] However, the chapter was unable to produce an example of the suit, due to the difficulty in acquiring necessary components, before being wiped out during their attempts to eradicate the scorchbeasts. The Lost Hills chapter likewise never produced any of these suits, as the communication satellites failed, preventing further communications, and the Ultracite needed for the suit was a resource unique to the Appalachia area.[2]

The Ultracite is one of the most powerful models of power armor in Fallout 76, offering great ballistic protection. It is the armor of choice for heading into areas dense with the Scorched or facing off against Vertibots.

As with all power armor helmets, the helmet protects against contracting waterborne diseases.

Visually, the armor is similar to T-51 power armor, though is modified with additional plating bolted to the pauldrons, a thickened breastplate with added vents, and the muzzle of the helmet lengthening up and splitting the lenses in two.

Material modifications are available after purchasing the necessary entitlement in the Atomic Shop. All paints require 2 oil, 2 plastic, and 2 steel per element.

Retrieved from "https://fallout.fandom.com/wiki/Ultracite_power_armor?oldid=3474876"
Community content is available under CC-BY-SA unless otherwise noted.