Ultracite is a crafting component in Fallout 76.

Ultracite is a radioactive glass-like ore discovered by Atomic Mining Services beneath the soil of Appalachia. By using atomic detonations to mine deeper than ever before, AMS was able to turn previously abandoned coal mines into new sources of prosperity.[1] Although its origins mystified AMS scientists, its properties did not: Ultracite was an incredibly potent source of energy.

When properly handled it could supply enough power to keep industrial-grade machinery working for decades. If not, its potency could slag reactors and cause meltdowns. AMS fully believed it to be the future fuel source for the entire United States - and with them in control of the supply, their hegemony on the market.[2]

At first, AMS started locally, powering Watoga and leasing their technology to the two major corporations on the mining market in Appalachia: Hornwright Industrial and Garrahan Mining Co., as well as the energy conglomerate Poseidon Energy, treating the substance similar to that of uranium.[3] The contracts came with strings attached: To power the Excavator power armor, Garrahan had to make a decade-long commitment to AMS technology.[4] In addition, Poseidon Energy Plant WV-06 was retrofitted to burn Ultracite fuel.[5]

While they secured a dominant position on the market, AMS also worked to remove the obstacles to widespread adoption of Ultracite nationwide: Depleted Ultracite played havoc with the regular material, resulting in a corrosive reaction melting both materials, necessitating extreme care in separating and containing the two materials. However, that complication was only second to the biggest one: AMS did not understand the creation process for Ultracite. This led to situations where shafts marked as failure could suddenly develop veins of Ultracite, as well as grow and expand beyond previous expectations, as was the case with Mine Shaft No. 9 near the town of Welch.[6]

The Ultracite vein rapidly developed, emerging not just in the shaft, but inside the town.[6] To maintain their monopoly, AMS quickly secured property rights within twelve hours and moved in to force everyone in the town off of their property. Unsurprisingly, the move radicalized the already angry miners.[7][1]

A very rare component used for crafting anti-Scorched weaponry, Ultracite power armor, and other powerful weapons and armor. Ultracite and depleted Ultracite cannot withstand contact with each other; instead, contact results in both samples explosively melting down. Atomic Mining Services learned of this via experimentation with the material,[6] while the Responders later discovered and utilized this information via Hank Madigan.[8]

Having proven that the Scorched Plague causes the formation of Ultracite shards within living tissue, the Responders took the opportunity to weaponize it,[9] making retrofitted Ultracite weaponry extra effective against Scorched creatures. 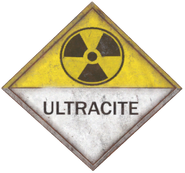