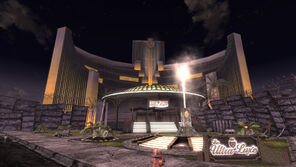 The site of the shootout, the Ultra-Luxe casino, circa 2281

The Ultra-Luxe shootout was a gun battle between a supposed group of mobsters and the Las Vegas police before the Great War.

Officially, on Wednesday, July 13, 2072, a group of mobsters were gambling at the Ultra-Luxe casino in Las Vegas when police arrived, leading to a gun battle between the two groups.[1]

The exact circumstances of the gunfight are unknown, with multiple conflicting reports from eyewitnesses as to what happened. A cashier reported the group of mobsters was on a winning streak when a soldier arrived and fired at them with a missile launcher, killing two of them, while other witnesses said that the battle was started by a sniper firing at the mobsters. During the course of the battle, witnesses say that they saw the mobsters try to surrender on two occasions.

When it was over, hundreds of rounds had been fired, almost all the mobsters were dead and 17 bystanders had been injured. The chief of police claimed it was a major victory for the city, and that, "It's time for us to send a clear message that no one in Las Vegas is above the law."

The next day it was discovered that a survivor of the shootout had managed to make it to a high roller suite in the Lucky 38, where they were discovered with $20 million in cash stuffed inside several duffel bags. The survivor, an alleged Chinese spy dubbed by the media "Shanghai Sally," escaped the Lucky 38 using a bedsheet rope and fled east, away from the city, stealing various vehicles, allegedly including a United States Army Vertibird. She made her way to Galveston, Texas, where she was identified by a Red Rocket attendant. She then stole a speedboat and attempted to flee the area, but the boat was destroyed by the USS Wade.[2]

This version of events is highly suspect, as the real circumstances of the shootout were the subject of an intense coverup. Residents of Berkeley Springs recognized the "mobsters" as being missing soldiers from the local area, with "Shanghai Sally" being identified by C. Rutkowski as his partner Sergeant Kathryn Montgomery, who had been missing for three weeks.[3]

This led to an increased military presence in Berkeley Springs and the disappearance of Rutkowski and any record Sergeant Montgomery ever existed, despite several residents remembering her socializing with other soldiers in town on several occasions.[4]

The intense media coverage and subsequent coverup led Flavia Stabo to begin investigating the events of the shootout, and its connections to the "Appalachian Treasure."

The Ultra-Luxe shootout is mentioned only in the Fallout 76 Wastelanders update.

Retrieved from "https://fallout.fandom.com/wiki/Ultra-Luxe_shootout?oldid=3434981"
Community content is available under CC-BY-SA unless otherwise noted.