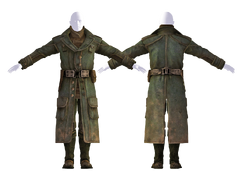 The US Army General outfit is a unique piece of clothing in the Fallout: New Vegas add-on Lonesome Road.

The US Army General outfit consists of an olive drab overcoat worn over a base, khaki uniform. The lapels are adorned with 'US' insignia pins and four stars on each shoulder.

Hopeville missile silo bunker, found on the body of General Martin Retslaf in the second level of the silo.

The General outfit uses the Chinese jumpsuit's Pip-Boy icon rather than having its own unique icon.

The Courier, wearing the US Army General outfit during combat
Español Русский Українська
Community content is available under CC-BY-SA unless otherwise noted.
Advertisement