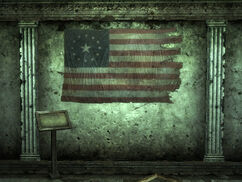 The U.S.S. Ebon Atoll was a United States Navy cruiser.

In 2066, the U.S.S. Ebon Atoll was accidentally sunk by the U.S. Navy submarine USS Interference during the Battle of Anchorage. The Interference mistook the Ebon Atoll for an enemy vessel during radio silence and shot it with a nuclear torpedo without obtaining visual confirmation, killing all on board. It was one of the worst U.S. Navy disasters since World War II.

The following transcript can be read on the plaque in the Museum of Technology.

This flag was recovered from the wreck of the U.S.S. Ebon Atoll, a U.S. Navy Missile Cruiser, sunk off the coast of Alaska in 2066 with all hands lost. The cutting edge vessel's loss was due to a nuclear torpedo strike from the U.S. Navy Submarine, the U.S.S. Interference during the Anchorage Campaign. The submarine mistook the cruiser for an enemy vessel during radio silence and sunk it before obtaining visual confirmation. This ranks as one of the most tragic disasters in U.S. Naval History since World War II.

The U.S.S. Ebon Atoll is mentioned in Fallout 3.

The U.S.S. Ebon Atoll is a nod to Black Isle Studios. "Ebon" means something made of ebony or black in color, and an "atoll" is a name for a small coral island.