Two separate buildings support the ship on their roofs depending on the quest's status.

One large colonial-era wooden frigate with several interior cells, as well as a large top deck.

Fallout 4
“You visit this fine vessel in trying times. Becalmed these long years on her airy perch. Damn you Weatherby Savings & Loan! I spit at you!”— Captain Ironsides

The USS Constitution is a location initially in the Charlestown neighborhood of Boston in 2287.

The ship is run by a crew of robots led by the charismatic sentry bot Captain Ironsides. Sometime between 2077 and 2287, NX-42 rocket engines were fitted to both sides of the ship,[1] with wiring and electronic equipment installed throughout the ship, as well as a radar dish set up on the main deck. The ship then attempted to take off but ended up landing on top of the Weatherby Savings & Loan, just north of Boston.[Non-canon 1][Non-canon 2]

The ship can be boarded by either going to the second floor of the building the ship rests on, and then entering an access door in the hull of the ship, or by using the elevator to the ship's stern (back) to access the top-deck directly. The inside of the ship consists of three decks filled with supplies and items along with several turrets, protectrons, and some Mister Handys located throughout.

Below decks, the ship has a weapons workbench, an armor workbench, a chemistry station and a cooking station. On all decks except the top deck, all items are marked as owned, meaning one will be attacked upon taking them. This also counts for anything that is placed in a container. Only items that are stored in any of the workbenches or stations, or are on the top deck, can be taken without risk of consequences. The captain's quarters (Master locked) come with a full bed which can be used after completing Last Voyage of the U.S.S. Constitution.

The USS Constitution appears only in Fallout 4.

Ship's name on the stern. 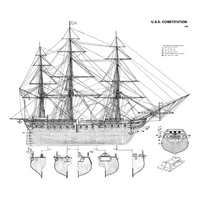 The U.S.S Constitution taking off