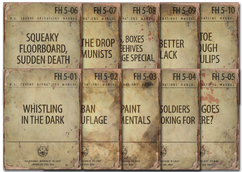 U.S. Covert Operations Manual is a perk magazine in Fallout 76.

U.S. Covert Operations Manual is a training handbook produced by the Department of the Army to train its personnel in the art of subterfuge. The manuals were not intended for public circulation and were marked "Authorized Eyes Only."

Reading an installment of U.S. Covert Operations Manual will temporarily give the player character a unique bonus, such as increased damage resistance while sneaking or increased damage to others. All bonuses expire after 30 minutes (60 minutes with Curator), and the magazine is consumed once read.

Installments of U.S. Covert Operations Manual are affected by Pannapictagraphist and will emit directional audio when the player character is in range.

Issue FH 5-10
Add a photo to this gallery
Retrieved from "https://fallout.fandom.com/wiki/U.S._Covert_Operations_Manual_(Fallout_76)?oldid=3353137"
Community content is available under CC-BY-SA unless otherwise noted.