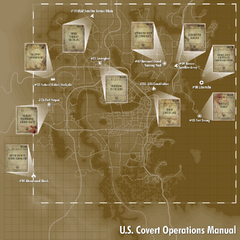 “Each installment of US Covert Ops Training Manual you collect adds a rank in the Infiltration perk, which gives a slight increase to your sneak chance.”— VDSG Catalogue No.8432

U.S. Covert Operations Manual is a training handbook produced by the United States Department of the Army to train its personnel in the art of subterfuge. The manuals were not intended for public circulation and were marked "Authorized Eyes Only."

Each magazine gives a rank of the Covert Operations perk which makes one more difficult to detect while sneaking.

* Note that the graphics of #7 and #8 are reversed (see bugs), so if you check your inventory for which ones you have and which not, reverse those two.

All of the manuals seem to have an error on the bottom text, reading "Department The Army." It should read, judging by the Department of the Army logo used above, "Department Of The Army."

The world graphic of issue #7 matches the inventory graphic of #8 and vice versa.[verified]