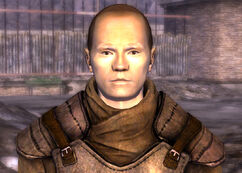 Don't Make a Beggar of Me

Tyrone is an NCR trooper deployed to Primm as part of Lt. Hayes' company to fight the Powder Gangers, Vipers and Jackals in 2281.

Tyrone is an NCR trooper that is stationed somewhere across the border in California, who makes deliveries to the troops in Primm a few times each month.[1] This is his preferred arrangement as otherwise he'd be working for a Brahmin baron either farming or herding cattle.[2] And with this particular arrangement, Tyrone makes money on the side by selling "misplaced" chems to Chomps Lewis for the Great Khans drug operation. Chomps uses his daughter Melissa, who is a courier for the gang, to ensure that packages safely reach Great Khan territory.[3] Tyrone isn't exactly the reliable type, however, with Chomps Lewis noting that Tyrone has always been kind of shady, but recently has outright cheated Chomps by raising the price of the supplies without warning.[4][5]

Tyrone's unexpected price hike isn't without reason as NCR brass were beginning to receive reports that their chemical supplies were reaching the Great Khans who in turn create drugs to sell to the Fiends.[6] Tyrone feels like this trip is far riskier than before and because of that wanted more caps.[3]

A female Courier with the Black Widow perk can sleep with Tyrone.[7]

Retrieved from "https://fallout.fandom.com/wiki/Tyrone_(Fallout:_New_Vegas)?oldid=3246625"
Community content is available under CC-BY-SA unless otherwise noted.