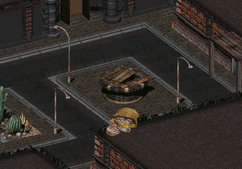 Typhon's Treasure is an unmarked quest in Fallout 2.

When talking to Typhon at the old ghoul's home in Broken Hills, he might mention that he has a treasure hidden somewhere, consisting of a huge amount of money he saved up. If you inquire further he'll tell you he might be willing to tell you the location of his treasure, in exchange for some favors.

If you agree to help him, he will ask you to fetch some items for him, in the following order:

Once you have brought him all these items, Typhon is ready to tell you the location of his treasure... except he has forgotten where he hid it. He does remember hiding it somewhere in Broken Hills Downtown, and the location would probably be somewhere that wouldn't have been torn down or plowed over in the many years since he hid it. You will have to find it on your own. You will get 2000 XP for your troubles though.

Searching for the "treasure"[edit | edit source]

At this point, you can choose to go look for the treasure on your own. You can ask Micky the treasure hunter for suggestions on where to look, but he can't think of anything. The one structure in the downtown area that fits Typhon's description is the town well. Go over there and interact with the well, and you will be treated to a short sequence where the Chosen One finds Typhon's bag hidden behind a brick, but accidentally drops it down the well. The well is too narrow for you to climb down, you'll need someone smaller...

Go over to Micky and ask to hire his services, and tell him you are willing to split the loot 50/50. He will then climb down the well and retrieve the bag for you. It turns out the "treasure" consist of 10000 bottle caps, the obsolete and now completely worthless former currency of New California. The Chosen One is furious over the worthless loot, and promptly forgets about Micky, who remains stuck down the well.

Afterwards, you can confront Typhon about the "treasure". He claims he didn't know bottle caps were no longer in use and that it was an honest mistake. You can choose to either forgive him for the mistake or take revenge on him for deceiving you. Be aware that choosing the latter will likely turn the entire town hostile.

Bringing all the items for Typhon will net you 2000 XP. Finding the treasure will give you the item bottle caps, which has no use and no resell value.

Retrieved from "https://fallout.fandom.com/wiki/Typhon%27s_Treasure?oldid=2540787"
Community content is available under CC-BY-SA unless otherwise noted.