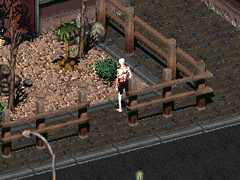 “Another waste-baby, huh? Hey, kid, you want to know a secret?”

Typhon is a glowing one living in Broken Hills in 2241.

Typhon is the son of Set. He is said to have intelligence gleaming from his eyes.[1] He is not a born ghoul, but rather was Set's son before they turned into ghouls after the Great War. He agrees with the assessment that his father is "a real bastard". He had a stash hidden in a well in Broken Hills, which turned out to be little more than worthless bottle caps.

Typhon's Treasure: He wants the Chosen One to find some objects such as a Cat's Paw magazine, a rubber doll, a plant, and a rot gut. After all of this hard work, Typhon will tell them that he hid the "treasure" somewhere in Downtown; more precisely in a Town Well. However, as the Chosen One is too big, and cannot fit in the well, some smaller assistance is needed.

After giving Typhon a rubber doll, several hours later he will be carrying a damaged rubber doll.

Typhon appears only in Fallout 2.

Retrieved from "https://fallout.fandom.com/wiki/Typhon?oldid=3328227"
Community content is available under CC-BY-SA unless otherwise noted.