Tyler County Dirt Track is a location in the Forest region of Appalachia. It is a public workshop with claim and defend event quests.

Tyler County Dirt Track planned to host a "Halloween Night Thrills" demolition derby of ten events in one night, featuring "Hot" Rod Daniels. Admission would have been $34.20 for adults and $24.20 for children, though parking would have been free, and "Halloween Hayrides" would be provided for families.[1][2][3]

This location is a large dirt race track with spectator stands to the north and south. The center of the track has been turned into a workshop area with resource deposits, excavators, and inoperable cars.

At the top of the southern set of stands is a two-story announcers' booth which can be accessed via a staircase at the back of the stands. There are cameras pointed at the track and several desks in the large room at the top of the building. The room contains a locked safe and a first aid and there is a Mr. Handy model on top of one of the desks.

When in the area, player characters can claim this as their own settlement. The building area encompasses the whole dirt track complex and extends a little beyond the northern road. Resources are limited, with water (3), food (1), fertilizer (1), junk (1), silver (3), aluminum (1) and steel (1). There is an additional chemistry station in the small shed to the west, just outside the perimeter.

The Tyler County Dirt Track is based on the real world location of the Tyler County Speedway, also known as the "Bullring," in Middlebourne, West Virginia. 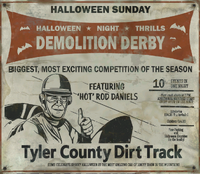