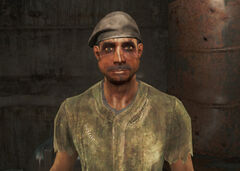 Private Tyler is a deceased Gunner in Nuka-World in 2287.

Private Tyler is a Gunner deserter who began seriously considering leaving following the murder of another Gunners member, Davis. Tyler became tired of constantly having to watch his back, fearing the same fate as Davis and wishing to leave for somewhere where he could sleep easy. He ended up leaving the Gunners during a super mutant attack as cover and hid out in a building on the far west side of the Commonwealth.

Tyler ended up being chased further west by feral ghouls, eventually coming to the Nuka-World transit center where he discovered someone calling for help. Tyler entered the Gauntlet and died in the Nuka-World access tunnels section.

Despite being named "Private Tyler" his personal log says he is "Private Taylor."

Private Tyler appears only in the Fallout 4 add-on Nuka-World.

Retrieved from "https://fallout.fandom.com/wiki/Tyler_(Nuka-World)?oldid=3450481"
Community content is available under CC-BY-SA unless otherwise noted.