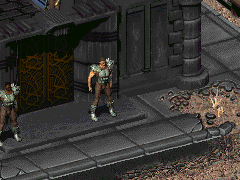 “Pretty fucking bored. I hate guarding - but, hey, things can't be that bad. A buddy of mine won it big at the tables and he's sharing the wealth, if you know what I mean.”

Tyler is the leader of a small gang in the Den East Side in 2241.

A strong man[1] in metal armor, Tyler was hired by Metzger to guard a church filled with the raw chemicals used to make Jet. He can be a pretty decent fellow, especially when he can party and drink. He sometimes does not like guarding.[2]

Tyler appears only in Fallout 2.

Retrieved from "https://fallout.fandom.com/wiki/Tyler_(Fallout_2)?oldid=3379793"
Community content is available under CC-BY-SA unless otherwise noted.