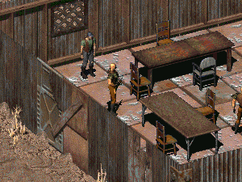 “We Rangers hail from back east, what used to be called Nevada. Our heritage stretches back to the days of the Texas Rangers.”

Tycho is a Desert Ranger[1] and a recruitable NPC in Fallout.

Hailing from Nevada, Tycho is an expert on the wasteland and surviving within it. He comes from a small group of survivalists that avoided nuclear annihilation in the badlands of Nevada. This community taught him a lot about desert survival, weapons training and other related topics.[2] Tycho's wanderlust soon drove him to wander the desert with traders and explorers for several years. He always returned to his home, with news and goods. Eventually, the range of his travels grew as far as the Gulf of Mexico in Texas. He later signed on with the Desert Rangers and headed west towards the coast, as a member of a loose grouping of long-range Rangers explorers.[Non-game 1]

In appearance, he seems like any other wasteland explorer, with leather armor, a gas mask hanging around his neck, goggles to keep out sand and glare, a sand-colored cloak usable for camouflage and sun protection, completed by a double-barreled shotgun.[3][Non-game 1] However, as a Ranger, his priority is to make things better, just like the Texas Rangers did.[4] That's why he studied the art of surviving and combat extensively. Around 2162, he decided to stay at Junktown for a rest from his travels. He believes that the settlement shows promise should someone clean up the less than savory business of the town (Gizmo, whom reminds him of a different "fat freak" that his father told him about from Las Vegas). He doesn't believe that to be him, instead believing it to be Killian Darkwater when he is able.[5]

If caught stealing Neal's urn from the Skum Pitt (before recruiting), Tycho will turn hostile.

Tycho can be found randomly when taking a card from the loot deck. When exploring with him as the active companion, the player character can exhaust him in to gain two experience points.

Tycho appears in Fallout and the Fallout: The Board Game expansion Fallout: New California. He is also mentioned in Fallout 2.

Retrieved from "https://fallout.fandom.com/wiki/Tycho?oldid=3461318"
Community content is available under CC-BY-SA unless otherwise noted.