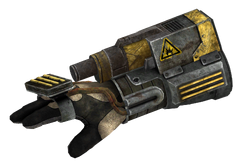 The Two-Step Goodbye is a unique variant of the ballistic fist, with only a single barrel mounted on the forearm. Sections of this ballistic fist are colored yellow, as opposed to the standard variant's monotone color scheme. An explosives warning symbol is printed on the side.

If a target is killed by a critical hit, the contact-triggered explosives will detonate within the fallen target after two seconds, subsequently dealing an extra 175 splash damage. Friendly non-player characters caught in the blast radius may become damaged, and even turn hostile, if the user isn't careful.

Two-Step Goodbye can successfully strike about 395 times from full condition before breaking.

Two-Step Goodbye in use

Two-Step Goodbye in the achievement image for Curios and Relics