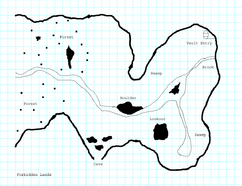 The Twin Mothers Forbidden Lands is a location in Van Buren, the canceled Fallout 3 by Black Isle Studios. This area is located at the rear of the box canyon that the Twin Mothers tribe calls home.

The Twin Mothers know nothing about this area of the canyon. The goddess has steadfastly forbidden them to come here. Attempts were made in the past to explore the area, but in each case, the explorers returned with tales of encountering the goddess and being warned away. Needless to say, these tales have curtailed curiosity over the years.

The forbidden lands lead to the entrance of Vault 29. When a Twin Mothers native is detected, a projector near the entrance causes the goddess to 'manifest' and warn away the trespasser. If the native persists and enters the pipe that leads to the vault, the door opens for them but quickly seals itself once they step inside. They are then visited by the goddess again who directs them to the main computer room of the vault. There they are rendered unconscious and their short term memories erased. A robot then deposits them at the edge of the forgotten lands so that they can wander safely back to the tribe once they awaken.[1]

Entering the vault by the player character can be accomplished in a couple of ways. Dressing as a Twin Mothers tribal will cause the goddess to manifest and warn the player character away. If they continue down the pipe the door will then open for them but close again once they are inside. Otherwise, they will have to hack the door open with science skill.

The Forbidden Lands are home to a raider clan known as Scorpion's Bite. Their leader, a man named Burk, became very curious about the tribe when he discovered the non-aggressive security robots. He decided to befriend the tribe and learn as much as he could about them. Over the months he learned of their belief in the goddess, their pacifist ways, and that the goddess has apparently abandoned them. With this information in hand, he began to demand tribute from the tribe in the form of food and livestock. He also set up camp in the forbidden lands because the natives refuse to enter them.

Most of the raiders blindly follow Burk's orders. He is a well-educated man and has proven to be quite good at what he does. His leadership has led the Scorpion's Bite clan to a position of dominance in the wasteland. However, there are two dissenters among his ranks, Trisha and Sharon.

Trisha is a pretty young woman who has no qualms about using sex as a means to get what she wants. She has been in several raider clans, has worked her way to the top, and then been instrumental in the clan's destruction. In each case, she has come out on top with a position of power in the new clan. Trisha is now Burk's girlfriend. Currently, she is trying to find a way to deliver a holo-disk to a member of Caesar's Legion. The disk completely details the Twin Mothers area and provides all the information necessary for a takeover.

Sharon is a cruel mean spirited woman who wants nothing more than to be taken care of. Like Trisha, she has no qualms about using sex to get where she wants to be. However, unlike Trisha, Sharon is overweight and not very pretty. When Trisha came into the picture, Sharon was immediately cast aside by Burk. This train of events has not improved Sharon's disposition at all. She would like nothing better than to put a bullet between Trisha's eyes so that she can get back into Burk's bed and the easy life she once had.

Retrieved from "https://fallout.fandom.com/wiki/Twin_Mothers_Forbidden_Lands?oldid=3330352"
Community content is available under CC-BY-SA unless otherwise noted.