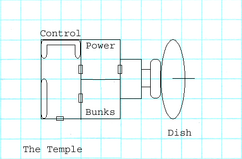 The Twin Mothers Dish is a location in Van Buren, the canceled Fallout 3 by Black Isle Studios.

The Twin Mothers Dish is a small radio relay station that has been deserted since the Great War.

The station is currently in poor shape. The fusion reactor has failed and switched over to battery backup power.[1]

The station is located on the plateau above the box canyon that houses the Twin Mothers tribe. It can be reached via a narrow cave in the canyon wall located in the forbidden lands. The cave entrance is hidden behind some cleverly placed boulders. They are placed in such a way to give the illusion of being a part of the canyon wall. However, if the boulders are approached from the proper angle the cave entrance can be clearly seen.

The main room contains the communication and tracking equipment for the satellite dish. A side room contains bunks and a small recreation area for the crew. Another room contains the fusion reactor and battery backup system that powers the station. The final room holds the mechanism that moves the dish to desired coordinates.[1]

Discover the dish - The player must go inside the Twin Mothers Dish to find and repair the satellite in order to find the location of the Nursery.

The Twin Mothers Dish was going to appear in Van Buren, the canceled Fallout 3 by Black Isle Studios.

Retrieved from "https://fallout.fandom.com/wiki/Twin_Mothers_Dish?oldid=2795698"
Community content is available under CC-BY-SA unless otherwise noted.