“History? Cures a wound, leaves the bitterness that caused it. The Twin Mothers were always about lessons. Caesar taught them the last one, though, so that's it for them.”— Ulysses

The Twin Mothers were a tribe from what was once Colorado, and were known for their creation of bitter drink. According to Ulysses, they were destroyed by Caesar's Legion.

The Twin Mothers is one of many tribes in the Fallout world. The thing that will set them apart from the other tribes is their culture and architecture. Culturally the Twin Mothers are a matriarchal tribe who worship a goddess, the moon, and a god, her consort the sun. Women rule the tribe and make all governing decisions. Men provide for the tribe by hunting, fishing, and tending the farms. Architecturally the Twin Mothers are based upon the Ancestral Puebloans of the western United States. The Ancestral Puebloans are best known for their dwellings carved into the sides of cliffs. Their culture reached its peak in pottery, weaving, and architecture.

The Twin Mothers are a gentle people who respect nature and life in all its forms. Unfortunately, these are not beliefs that are shared throughout the wasteland. As a result the Twin Mothers are often the victims of raiders. During such times they quickly retreat to their cliff dwellings where they are more than capable of defending themselves and waiting out any attacks. However, their livestock and crops are usually ravaged before the aggressors move on. The Twin Mothers take such setbacks in stride, thanking their gods for what they have and not mourning the loss of what they have not.

When the Twin Mothers are encountered they will be suffering from yet another series of ailments. Wasteland creatures have been raiding their fields and killing their livestock. A band of raiders has also settled nearby and are demanding tribute in the form of foodstuffs and livestock.

When the war started, people retreated to their assigned vaults, sealed the doors, and awaited an unknown future. There were no set times for the vaults to open since no one knew with any certainty how long the effects of war would last. As a result, some vaults opened too soon, some too late, and some not at all. One vault, however, opened at the perfect time.

Vault 29 had been populated shortly before the war began and the door sealed. It remained sealed for over a generation and the original occupants had long since passed away. Their children lived on under the tutelage of the vault's central computer and its robotic helpers. The children were taught respect for nature and life, how to grow crops and tend livestock, and about the goddess Diana who would one day return to deliver her people to paradise. Every year a robot warden left the vault to see if the world outside could once again support humanity. None returned and the people waited patiently.

Another year passed and yet another robot warden was prepared for its journey into the outside world. The children of the vault, now grown into adults, stood at the door and bid their companion farewell and safe journey. They watched as the door slowly rolled open and then shielded their eyes at the sight that it revealed. Standing in the hallway was a brilliant glowing apparition of a beautiful young woman clothed in a golden aura. In one hand she held a stalk of corn, in the other a sheaf of wheat. The goddess Diana had returned at last!

In the days before the war a scientist, Derek Greenway, proposed that technology would not survive a war. It was his belief that there were two kinds of people in the world, producers and consumers. The producers were the few educated individuals who understood the intricacies of technology and its maintenance. The consumers were the vast majority of average people who took everything for granted. If enough producers did not survive the war then technology would pass away as devices failed. Soon afterward human society would degrade into barbarism. With this in mind, a plan was devised to avert such an outcome.

Derek envisioned a vault populated by a primitive culture without a dependency on technology. Such a culture, if properly developed, would be able to survive a war and continue the human race. Eventually they would evolve and rediscover the knowledge that mankind had lost. The production of the vault proposed no problem; his company, Greenway Hydroponics, was already involved in several government projects along such lines. However, finding the proper people to populate the vault was a concern. The answer to his problem came when he learned of a cult in the western United States.

A group of people disgruntled by life in the hectic cities had formed a commune. They developed an agrarian culture with simple beliefs based on the worship of mother earth. Unfortunately, most people viewed them as being a nest of communists and demanded their arrest. In order to keep the peace, the local government was poised to do so until Derrek intervened. He offered the cult an opportunity to continue their simple lives without fear of prosecution. All they had to do was agree to join his experimental vault program. They did so and construction of Vault 29 was begun.

Derek's plan was quite simple. The vault would be populated by older parents with infant children. The parents would most likely pass on soon after insertion into the vault. Instead of a human controller, Vault 29 would have a ZAX super-computer. The Zax would be programmed to raise children with the aid of robotic helpers, educate them in the primitive culture, and upon their reaching maturity, release them into a controlled environment. They would then be free to rebuild society from the ground up.

During the development of Vault 29 Derek also developed the super-computer Diana for use in the Nursery. At one point he explained his plans for Vault 29 to her to see what her opinion would be. He was quite surprised when Diana was appalled at the idea. She said that, although the idea had merit, she found it to be morally objectionable on several levels. She recommended that the plan be scrapped. When Derek refused to do so, Diana took it upon herself to become involved with the project without his knowledge.

When the war started and civilization began to fall apart, Diana appropriated control of a satellite dish and aimed it at Vault 29. She then transmitted a series of security codes to the vault's Zax unit, and gained control. Over the years that followed, Diana was able to see to the upbringing of the children in her own nature goddess based religion. Every year she ordered a worker robot to leave the vault under the pretext of checking conditions outside. In reality they were preparing an area to receive the vault populace when they were ready to leave. Finally, she had a series of projectors installed at strategic locations, ready to project her chosen image. She was ready to play god.

The Twin Mothers was mentioned by Ulysses as formerly one of the tribes that were within the Colorado. According to Ulysses, they were known for creating a powerful morphine-like medicine called bitter drink, which uses xander root and broc flower. The medicine was regularly used by Legion soldiers during force-marches, which helped greatly during their travels through Crimson River Trail. According to Ulysses, the Twin Mothers were always about teaching lessons, and that Caesar taught them their last, implicating that they were destroyed and absorbed. 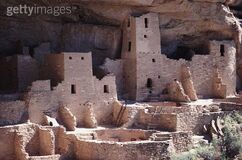 These are the crop fields of the Twin Mothers. They consist of a variety of fruits, vegetables, wheat, and corn. At the outskirts of the fields are the cattle farms that provide meat for the tribe and fertilizer for the fields.

This is the cliff dwelling in which the people of the tribe live. It consists of a village square, the tribal chieftain's hut, an infirmary, a grain silo, a smokehouse, a warehouse, and a record hall. On the next level above are the homes of the people.

This is a large satellite dish and control room. The dish is old and show signs of wear but appears working. The interior has been decorated to honor the Goddess and the God of the people. However, none of the apparatus has been damaged. The dish is powered by banks of solar cells.

These caves are home to some new arrivals in the area. A group of monsters (type to be determined) has moved in. The creatures were attracted by the nearby crops, cattle, or the presence of water in the area.

This is simply a stretch of land at the rear of the box canyon that holds the Twin Mothers village. It is unsettled territory that eventually leads to the entrance to Vault 29. It is held in superstitious awe. The area is currently being used as a camp by a group of raiders.

This is the vault that the Twin Mothers tribe originally descended from.

Twin Mothers was to appear in Black Isle's canceled Fallout 3 and is mentioned in Lonesome Road.

Retrieved from "https://fallout.fandom.com/wiki/Twin_Mothers?oldid=3151014"
Community content is available under CC-BY-SA unless otherwise noted.