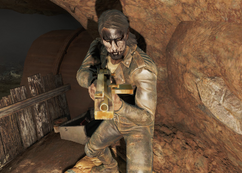 “So this guy made sure he had everything he needed before he started his camping trip in that little shack up top. Double checked his list and everything. And that's why they call it "being Thoreau."”

Tweez is a raider appearing in the Commonwealth in 2287.

Tweez is a member of a group of raiders occupying Walden Pond. This group occasionally strong arms food away from Abernathy farm and the Sole Survivor may be sent to deal with them in a Raider Troubles quest. He can be found just inside the hideout's sewer entrance, guarding the area with his partner, Bear.

Tweez is slightly more intellectually inclined than other members of his gang, though this is not a high bar. He claims in a conversation with Bear that he once read a book on Transcendentalism (or "Trainsdentalism," as he calls it) when the gang "ran outta Grognaks," though his descriptions of the book indicate a severe misunderstanding of its content.

Tweez appears only in Fallout 4.

Retrieved from "https://fallout.fandom.com/wiki/Tweez?oldid=3177013"
Community content is available under CC-BY-SA unless otherwise noted.