During the Sino-American War, this location was used to detain and interrogate those suspected of being Chinese agents.[Non-canon 1] Prisoners were kept in abysmal conditions, with outhouses being the only sanitary facilities available and bunk beds crammed into wooden houses serving as living quarters.[2] Watchtowers with searchlights were erected at the perimeter while many security robots patrolled the base.[Non-canon 3]

All dead bodies were stored in the morgue, beneath the administration building. The morgue also contained a small crematorium, where bodies were disposed of. Several prisoners' remains are found in the morgue drainage channel, and several more in the bunkhouse. The morgue contains the corpses of Wan Yang (TD-0181), Ashley Cheng (TD-0831) and Mei Shen (TD-0204). Around the skeletons are several makeshift weapons and barricades.

The detention camp is composed of six constructs including four wooden buildings (bunkhouse A and B, and two interrogation rooms), a concrete administration building and an underground morgue. There is a metal barrel south of Interrogation Room A with a skeleton inside of it. Inside the morgue, there is a waste tunnel that leads to the outside. The camp is fenced and several guard towers are located at the corners of the fence, as well as at the entrance.

Many hostile feral ghouls and sentry bots can be found in and around the camp. A group of three to four smugglers may spawn here as well. In addition, there are sentry bots as well as turrets mounted under the guard towers. The radioactive environment is the home of several ghouls. Even after the area is cleared out, new ghouls will continue to migrate to the camp.

The camp's back area has a mound of waste barrels and detritus, near the western perimeter. This toxic waste has permeated the swampy ground, and has resulted in the sludge in and around the camp, resulting in the entire area having varying levels of radioactivity. The toxins are particularly concentrated in a few areas, such as a large chemical pool in the camp's center. Here, the chemicals bubble and churn, giving off a gas that is irradiated and cannot be drank.

Occasionally, the chemicals cause large bubbles to form and pop, releasing the gas. Bubbles may break free of the surface and bounce for a few seconds before popping. These bubbles can be manipulated by the Lone Wanderer, but are highly volatile. They will explode if shot with energy or incendiary weapons. 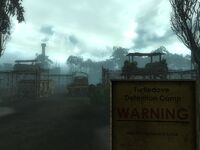 Another one bit the dust...

Loot in the administration office 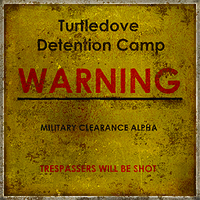