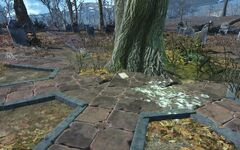 The turret override program is a holotape in Fallout 4. It is created when the magazine Total Hack Control Turrets is read.

This can be found at Wildwood Cemetery under the large tree in the center.

Retrieved from "https://fallout.fandom.com/wiki/Turret_override_program?oldid=3457491"
Community content is available under CC-BY-SA unless otherwise noted.