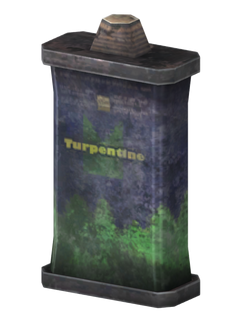 Turpentine is a miscellaneous item in Fallout: New Vegas.

Turpentine is a flammable liquid distilled from pine resin, used as a solvent. In Fallout: New Vegas, turpentine is used to craft turbo and is used to tan gecko hides, including golden, green and fire gecko hides. It is also used to craft "potent" and "lethal" varieties of the Cloud Kiss poison in Dead Money and to make dark datura in the Honest Hearts add-on.

Turpentine is an ingredient necessary to craft the following items:

Unused Pip-Boy icon
Add an image to this gallery
Retrieved from "https://fallout.fandom.com/wiki/Turpentine_(Fallout:_New_Vegas)?oldid=3324710"
Community content is available under CC-BY-SA unless otherwise noted.