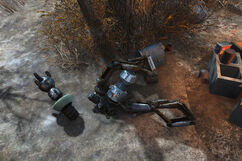 Turing is a destroyed Mister Handy located in the Commonwealth in 2287.

Turing was a member of Jackson's caravan along with Ada, Hurtz, Porter, Liza, Shades, and Zoe. His purpose was to help the caravan navigate through the wasteland, eventually bringing the group to the Commonwealth. He was destroyed in the robot attack that claimed the lives of his fellow caravan members.

Unlike Hurtz and Porter, Turing will actually be destroyed prior to the robot attack.

Turing appears only in the Automatron add-on.

Turing is named after Alan Turing, who is widely considered to be the father of computer science.

Retrieved from "https://fallout.fandom.com/wiki/Turing?oldid=3271773"
Community content is available under CC-BY-SA unless otherwise noted.