Lonesome Road
“They'll start emerging throughout the Mojave in time, might be years. Probably less. They breed fast, hunt in groups, more than enough to bring down the strongest in the Mojave. Once they draw blood... Seen them tear apart deathclaws... Deathclaw might get some, but the rest will swarm it, tear it apart, like Denver hounds.”— Ulysses

Tunnelers are creatures found in the Divide in 2281.

Ulysses speculates that they may be a result of the Great War.[1] After the bombs fell, radiation heavily mutated them, adapting them for an underground life. These mutations resulted in a form of bioluminescence. They evolved into quadrupedal predators that lived and bred beneath the sands of the Divide. There they remained, completely unaware of the surface world for nearly two centuries.

When the Courier was contracted by the New California Republic to bring a package from Navarro, they unintentionally caused the detonation of many of the nuclear warheads that had never been launched, slumbering in their silos since the Great War.[2] The subsequent explosions and earthquakes split open the ground, releasing tunnelers into the world above. However, due to their adaptations for life underground, they are hypersensitive to bright lights and loud noises. This leaves them unable to venture outside for extended periods of time, so they remain in the tunnels they have dug or other areas free of sunlight.

By 2281, according to Ulysses, the tunnelers may pose a significant threat to the Mojave Wasteland in the near future, due to their ever-expanding network of underground tunnels and nests. They reproduce quickly and hunt in large packs, enough to pose a significant hazard to the toughest of opponents, even deathclaws.[3]

Tunnelers appear to be reptilian-humanoids with dark, scaly skin, large bioluminescent eyes, a mouth filled with sharp teeth, and chitinous spikes protruding from their shoulders and heads. Tunnelers live underground, and are averse to intense sensory stimulation. This can be taken advantage of through the use of flash bangs or firing a flare gun, causing them to flee from combat and head back underground. Their enlarged eyes appear to be an adaptation to the conditions of their habitat. The tunneler's bite is known to be as deadly as a bark scorpion sting.[4]

Tunnelers will flee from a multitude of things such as:

These are the most common type of tunneler and will deal medium damage individually. Tunnelers typically attack in groups, swarming anything in their way. This makes them lethal opponents to even higher-level Couriers.

Hulking tunnelers are the second largest variant of tunneler, second only to the tunneler queen. They are quite rare and are not as fast as regular tunnelers, but if they strike the Courier, there is a good chance they will be staggered or knocked down.

The smallest of the tunnelers, they are also quite rare except at higher levels, when they are more frequent in the pack. Venomous tunnelers are faster than others and their attacks deal less damage on the initial strike. As their name implies, they possess a deadly venom that can quickly overpower an inexperienced player character. As they swarm with regular and hulking tunnelers, even a higher-level player character can be killed in a matter of seconds.

The largest of the tunnelers, the queen combines deadly speed and hard-hitting attacks, enough to kill even a deathclaw. While there is only one (located in the Cave of the Abaddon), she only has 25 less HP than a deathclaw.

The tunnelers are directly inspired by the titular creature from the movie The Mole People.[5]

Sometimes when attacking in V.A.T.S they will not take any damage, even with an obviously successful attack. [verified] 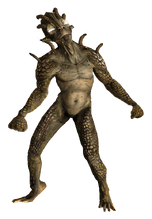