The Tunnel Snakes are a gang in Vault 101.

Six years later, on August 3, 2274, the gang members are harassing Amata Almodovar near the classroom. They are chiding her for being a "daddy's girl" and the daughter of the overseer. Amata is offended and frustrated by the unwanted harassment of the gang members. In this situation, the Lone Wanderer can choose one of three possible paths. The paths could involve them helping Amata for good Karma, helping the Tunnel Snakes for bad Karma or simply ignoring it and forcing Amata to resolve the situation herself.

By 2287, Wally Mack had moved beyond the Capital Wasteland and arrived in the Commonwealth to found his own group of Tunnel Snakes. The group eventually took hold underground in an abandoned unmarked subway station near the Chestnut Hillock Reservoir.[2] One of the subway cars had a ton of radioactive waste, raising some concerns. But Wally dismissed this, believing that the radiation could give them "superpowers."[3]

At some point later, the Tunnel Snakes had a brief skirmish with a group of Gunners, driving them off and capturing one of their members, from whom they took an intricately engraved gun called the Ultimatum.[4] By the time they had celebrated their victory, many members of the group had developed radiation sickness.[5] Eventually, many members of the group had succumbed to the radiation poisoning while others had turned into feral ghouls.[6]

The Tunnel Snakes primarily appear in Fallout 3. They are mentioned by Robert MacCready in Fallout 4,[7] and appear in Creation Club content. 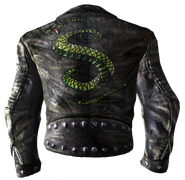 Tunnel Snakes logo on the back of the jacket