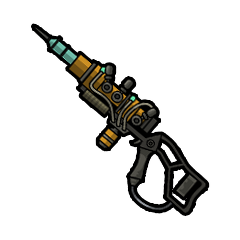 “For when you absolutely need to turn someone into lime gelatin.”— In-game description

The tuned plasma rifle is a weapon that appears in Fallout Shelter.

The tuned plasma rifle is a modified plasma caster featured in Fallout Shelter that fires super-heated bolts of plasma, using microfusion cells to heat and fire the plasma. Dealing 17 minimum damage per attack, it has the highest damage output for an energy rifle in the game.

A high Perception statistic is needed to effectively create the tuned plasma rifle.

Tuned plasma rifle card
Add a photo to this gallery

Retrieved from "https://fallout.fandom.com/wiki/Tuned_plasma_rifle?oldid=3100731"
Community content is available under CC-BY-SA unless otherwise noted.