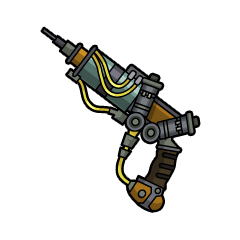 “Just a little hotter, and a little greener, than the standard model.”— In-game description.

The tuned plasma pistol is a weapon that appears in Fallout Shelter.

The tuned plasma pistol is a modified plasma gun featured in Fallout Shelter that uses energy cells to produce ammunition. Dealing a minimum of 11 damage per attack, it has the second highest damage output for an energy pistol in the game.

A high Agility statistic is needed to effectively create the tuned plasma pistol.