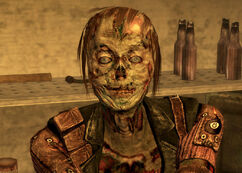 “If any of the armor fails to protect your life, I'll give you a full refund.”

Tulip is the proprietor of Underworld Outfitters in 2277.

Tulip, the owner of Underworld Outfitters, is known for her shrewd business sense. She obtains and sells a lot of merchandise, has the largest selection of any merchant in the wasteland, and protects her business interests with competitive prices and a unique ability to obtain unique items. Tulip spends most of her time in the store, but takes her meals at Carol's Place, leaving the shop under Quinn's watchful eye.[1]

A few of the other residents hint that she is interested in Satanic folklore. She says she's a member of The Railroad when asked.

While most settlers of the Capital Wasteland are ignorant of the origin for the D.C. ruin's super mutants, including their main enemy seen in the form of Lyons' Brotherhood of Steel, Tulip has somehow managed to glean information over the super mutants' captured humans being the ones that are bolstering their mutant army.

Tulip appears only in Fallout 3.

Retrieved from "https://fallout.fandom.com/wiki/Tulip?oldid=3299526"
Community content is available under CC-BY-SA unless otherwise noted.