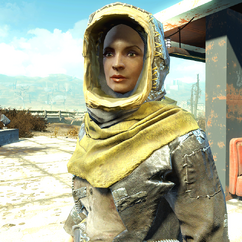 Tula Spinney is a Hubologist in Nuka-World in 2287.

Tula is one of the newer members of Hubology, being only an AHS-1, the lowest ranking within the cult. She is excited to grow within Hubology, but is upset that other members exclude her because she is "not a high enough AHS."

During Trip to the Stars, Tula will likely die after the Sole Survivor crosses the bridge on the way to the scrapyard, as she is always level 1 regardless of player character level. Although it is possible to keep her alive, one will find the process of trying to defend her from dangers very difficult.

Tula Spinney appears only in the Fallout 4 add-on Nuka-World.

Add a photo to this gallery
Retrieved from "https://fallout.fandom.com/wiki/Tula_Spinney?oldid=3256935"
Community content is available under CC-BY-SA unless otherwise noted.