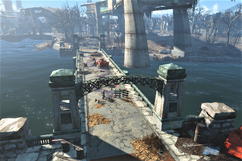 The Tucker Memorial bridge is a location in the Commonwealth in 2287.

The Tucker Memorial serves as a link between the northern Commonwealth and Cambridge over the Mystic River both before and after the Great War.

The Tucker Memorial bridge is covered end to end with gasoline and interspersed with ruined vehicles, four gas canisters, and five fragmentation mines. On the southern side is a tripwire connected to a makeshift bomb that if triggered, will lead to the entire bridge being set ablaze.

The Tucker Memorial bridge appears only in Fallout 4.

Add an image to this gallery
Retrieved from "https://fallout.fandom.com/wiki/Tucker_Memorial_bridge?oldid=3280775"
Community content is available under CC-BY-SA unless otherwise noted.