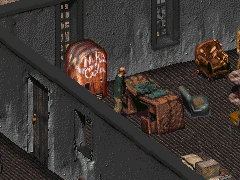 “Sure, that kind of money MIGHT help me change my mind. But you ain't got it!”— Tubby after the Chosen One tries to pay him for information

Tubby is the owner of Tubby's, a weapons store in the Den West Side in 2241.

Simply put, he is a chem dealer specializing in Jet.

Tubby appears only in Fallout 2.

Retrieved from "https://fallout.fandom.com/wiki/Tubby?oldid=3419089"
Community content is available under CC-BY-SA unless otherwise noted.