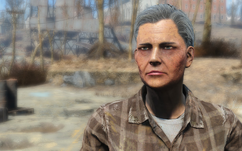 Trudy is a trader living in the Commonwealth in 2287.

Trudy set up a trading business at the diner some point before 2287, along with her son Patrick. At an unknown point of time, a chem pusher known as Wolfgang came into contact with her son and got him addicted to chems... and he couldn't pay him back. By the time the Sole Survivor arrives, a standoff between Trudy and Wolfgang is underway.

If the player character chooses to attempt to settle the dispute peacefully during the quest Order Up, it will allow them to talk to Trudy. She will offer 100 caps in exchange for help in eliminating Wolfgang, the man who got Trudy's son addicted to Jet. Afterward, Trudy will be available as a trader and each visit mentions her appreciation for the killing of Wolfgang.

Trudy appears only in Fallout 4.

Retrieved from "https://fallout.fandom.com/wiki/Trudy_(Fallout_4)?oldid=3176520"
Community content is available under CC-BY-SA unless otherwise noted.