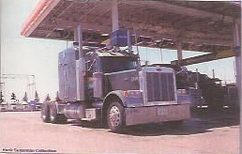 Image used as concept design for the truck stop in the FO:BOS2 design document

The truck stop is a stopping place for caravans in northern Texas,[1] it is owned by Stella. Harold brings the player character here during the opening scene.[2]

This location consists of a dozen houses and a truck stop. Instead of gas tanks, there are feeding troughs, that sort of thing. The north and south roads cannot be accessed. It is made up of two small maps; the exterior and interior.[2]

The junkyard is east of the truck stop. But beware: there are "giant naked rats that are ugly as sin" out there. It has a shed and an old pink car among other junk. It consists of two medium maps.[2]

Truck stop was going to appear in the canceled Fallout: Brotherhood of Steel 2.

Based off of the map, Truck stop is located in the city of Amarillo, Texas.

Retrieved from "https://fallout.fandom.com/wiki/Truck_stop?oldid=3175345"
Community content is available under CC-BY-SA unless otherwise noted.