A truck is a motor vehicle designed for utility purposes, to transport materials, or for personal and recreational use. Many variants of pre-War trucks can be found throughout the wasteland, their remains still littering the roadways of the United States.

A truck used for collecting and hauling materials.

A Mojave variant, used to transport and deliver materials.

A utility vehicle made for fighting fires, featuring a sloped front grill and water tank. The vehicle also has two blue rotating-beacons as its emergency lights.

Red in color with large printed words of "FIRE" on the sides and front of the truck. The doors read "Searchlight" and the back notes "750 GPM" or gallons per minute, with a 300 gallon booster.

A flatbed truck, some with company logos on the side.

A flatbed truck, with a container on the back.

Driven by the merchant Jesse, it is the only working vehicle in Carbon.

With the Nuka-Cola logo on their right side, they delivered crates of Nuka-Cola products throughout the country. 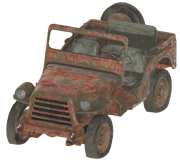 Large and boxy with room for four: the driver, a front passenger, and two rear passengers on a bench behind them. A spare tire is also mounted on the back on the right side of the vehicle.

Pick up truck with low suspension, a single-occupant cabin and flatbed compartment in the rear.

A traditional pickup, found throughout the Mojave and Zion National Park. Used for light commercial or personal transport. 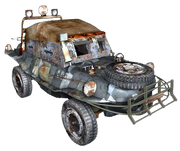 Great for quick reconnaissance work. The cockpit is almost entirely enclosed, although the armor is really only effective against light weapons. It holds two individuals but has a reasonable cargo capacity.

Steam trucks were used by super mutants in the Master's Army during the invasion of Necropolis. 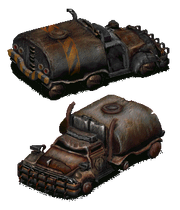 A large diesel truck designed to carry and transport liquefied loads. These loads can range from conventional water to more hazardous, dangerous, and reactive liquids such as liquid nitrogen, acids, or hydrocarbons such as oil.

Bearing the logo for Jay's Moving on the side, these transport trucks are commercial vehicles designed to move cargo such as foodstuff and manufactured products.