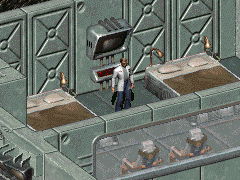 Deliver a sample of jet to Dr. Troy
Find some endorphin blockers to make a cure for Jet

“I am Vault City's primary physician. I take care of all the Citizens within Vault City and do my best to keep everyone healthy.”

Doctor Troy is the primary medical specialist of Vault City in 2241, responsible for all medical affairs related to the citizenry and its servants. His office is on the ground floor of Vault 8 and he has an assistant named Phyllis.

Residing on the entrance level of Vault 8 with his assistant, Nurse Phyllis, Troy is a middle aged man wearing a white lab coat.[1] He is one of the best physicians in the wastelands, with access to top notch facilities. As such, the level of care he provides is commonly considered to be the best of the best, including inoculations, vaccinations, cloning replacement organs and body parts, ensuring proper diets for all citizens, and more.

Dr. Troy is also concerned about the problems caused by drugs throughout the wasteland. The emergence of Jet has particularly concerned him, leading him to consider commissioning someone to smuggle a sample of Jet for him to analyze. Eventually, he managed to develop a Jet antidote, breaking the vicious cycle of addiction in New California.[2]

Dr. Troy appears only in Fallout 2 and is mentioned in the Fallout Bible.

Retrieved from "https://fallout.fandom.com/wiki/Troy_(Fallout_2)?oldid=3423598"
Community content is available under CC-BY-SA unless otherwise noted.