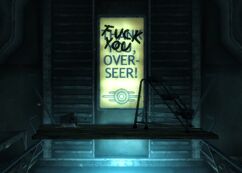 Complete Trouble on the Homefront

“Stop right there! I don't know how you got in here, but... Hold on...”— Officer Gomez after seeing the Lone Wanderer enter the vault

Trouble on the Homefront is a side quest in Fallout 3. It is also an Xbox 360 and PC achievement and a PlayStation 3 trophy.

This quest will be available 14 days after completing The Waters of Life and is initiated by picking up the Vault 101 distress signal on the radio. Note that if one elects to find the G.E.C.K, there may be issues picking up the signal. To find it, simply wander near Vault 101. The signal is only active for a limited time; if the quest is not started before the signal stops, the only way to start it is through the console.

The radio signal is a repeated a message from Amata asking the Lone Wanderer to return to Vault 101 to help stop her father, the overseer. If Alphonse Almodovar was killed while escaping from Vault 101, Allen Mack will be the new overseer; however, the radio message changes to "...the new Overseer is insane. If you can hear this, please stop looking for your dad and help save us."

Since the player character and their father escaped from Vault 101, the Vault has been divided into two major factions. The faction led by Amata, holed up in the clinic, wants to open the vault and interact with the outside world. The other faction is led by the overseer and he wants to keep the vault closed permanently, in accordance with its mission. Butch, wishes to abandon the vault entirely and live on the surface; however, the rest of the rebels simply intend to remain living in the vault, with the freedom to make excursions into the wasteland when necessary.

One of the essential reasons for having access to the wasteland and the remainder of humanity, apart from the obvious need for supplies and parts for the vault's aging life support apparatus, is to avoid collapse due to genetic stagnation and inbreeding. The number of Vault 101 residents has fallen significantly in the two centuries since it was sealed, implied heavily by various conversations and other means (such as a message encouraging procreation) prior to the Lone Wanderer's initial escape. If they successfully persuade the overseer to allow exterior access, then the overseer himself will finally accept and openly admit that without external input, the vault's population will not remain genetically viable for more than a generation or so.

Although there are only three different outcomes, there are plenty of ways to finish each, but regardless of the path the Lone Wanderer chooses he/she will ultimately be banished from the Vault.

There are essentially two ways to keep the vault closed; one way is to ignore the problem and leave. The downside to this is no quest-related rewards will be given.

After dealing with the rebels, the Lone Wanderer may talk to the overseer, who will ask them to leave. If asked about a G.E.C.K. he will reply that Vault 101 never had one and will offer the modified utility jumpsuit instead, whether or not violence was used. Alternatively, he can be asked for food and ammunition to get 13 Cram and 350 5mm rounds in place of the suit.

If the overseer lives, he will step down, and Amata will take on the role of overseer. This nets positive Karma; the same will occur if the overseer dies. Amata will show regret and sorrow if either Alphonse or Allen was killed or excitement and amazement if her father was persuaded to step down without violence. If she is spoken to she will then 'ask' the Wanderer to leave the vault permanently, in which she will echo the famous phrase from Fallout: "I'm sorry...you're a hero and you have to leave." Upon her saying this, the player character will not be able to engage in conversation with anyone else except Officer Taylor on their way to the exit. He will only say "Good riddance. Get out," and will immediately exit dialogue. Attempts to re-enter dialogue will just have him repeat his previous statement.

This result will stay the same even if the overseer was persuaded to stand down peacefully which will provide the modified utility jumpsuit (in the case of peaceful actions.) Later, Susie Mack can be encountered in the wasteland. Speaking to her will provide purified water, however she will say that the player character still cannot return. Butch will end up in Rivet City at The Muddy Rudder.

Hack the (Hard) computer in the sub-basement or steal the Vault 101 maintenance password from Stanley, the maintenance man, who can be found wandering around the cafeteria/dorm level. Go into manual override mode and perform a flush and a purge. This will flush the water chip, resulting in a catastrophic system failure (if Stanley is performing maintenance on the system, as he tends to do, the resulting explosion will kill him.) Everyone is now forced to evacuate the vault (triggering negative Karma.) Unless patch 1.1 is installed, one can even complete the quest with another method and then flush the chip, although this will render anything done prior in the quest meaningless.

Obviously, life in the vault is no longer feasible. A random encounter may occur where Amata is being interrogated by the Enclave. If she gives up the location of Vault 101, she will be executed. If saved, one can try talking to her, but she will scold the player character for what they have done. She does not have a destination and will eventually be killed by one of the horrors of the wasteland. Butch can be found at The Muddy Rudder bar in Rivet City and can be recruited, provided the player character has neutral Karma. In the random encounter Trapped Outside, dead residents can also be found (provided they lived through the vault visit.) In order: Freddie Gomez, Pepper Gomez, Herman Gomez. All of the other vault dwellers are not seen again.

Doing this nets no rewards of any kind except bad Karma.

Killing the overseer and Amata after getting the vault either open or closed results in failure of the quest itself. This also causes the vault to be left open and one can come and go as they please, however, all residents will be hostile. A message will appear explaining that Vault 101 has been "thrown into chaos." If it is once again returned to, the place will become infested with radroaches if all inhabitants are dead.

Fallout reference: Portions of Amata's speech to the Lone Wanderer when they leave are strikingly similar to the speech given to the Vault Dweller at the end of Fallout, even the number of ellipses used in each (bold quotes specifically).

Vault 13 Overseer's speech to the Vault Dweller:
You've done it! That's . . . wonderful. Amazing! I'm so proud of what you've accomplished, what you've endured.
There's no way the people of the Vault can ever thank you enough for what you've done. You've saved all our lives. Who knows, maybe even saved the human race. [The Overseer sighs.] That makes the rest of this even harder.

Everyone will want to talk to you. Every youngster will look up to you, and want to emulate you. And then what?
They'll want to leave. What happens to the Vault if we lose the best of a generation? What if we are the only safe place in the world? You just gave us back all these lives . . . I can't take the chance of losing them.
I've made a lot of tough decisions since I took this position. But none of them harder than this one. You saved us, but you'll kill us. I'm sorry. You're a hero . . . and you have to leave.

Amata's speech to the Lone Wanderer:
Amata: I... I just heard. the Overseer... My father is dead. What's more, some of the people are saying I should be the new Overseer. It's all so sudden.

Lone Wanderer: That's the way these things go. Now do the right thing for your Vault.

Amata: Oh, I will, believe me. We can open up limited trade with nearby settlements and other areas, and see the world we've been missing.
But it's still important that I protect our Vault, and keep the people within it safe from the dangers of the Wasteland. Even when those dangers have helped us in the past. And that makes the rest of this even harder.

Lone Wanderer: I've got a bad feeling I know where this is going.

Amata: You saved us. But that doesn't change the fact that you killed the overseer in cold blood to do it, and I can't let that sort of thing stand here. I guess it's a bit familiar. You've already been forced out of the Vault once before. At least now you know what's out there.
I'm sorry. You're a hero... and you have to leave.

NOTE: The above dialogue appears only if the overseer is killed as a solution. Resolving the problem diplomatically results in a different dialogue that does not reference the first Fallout.

Retrieved from "https://fallout.fandom.com/wiki/Trouble_on_the_Homefront?oldid=3353227"
Community content is available under CC-BY-SA unless otherwise noted.