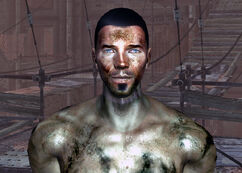 Trouble Man is an anti-social Pitt raider found in the Pitt in 2277.

Keeping to himself and not wishing to join in conversation with others, Trouble Man is haunted by waking nightmares that he stifles with a heady mixture of beer and jet. This subdues the "demons" but causes him to utter only a few words, and none of them pleasant.[1]

Trouble Man tells the player that he did "something bad" to get his name, yet he is hesitant to explain what. Due to his troublemaking, he's been distanced from the other slavers, either by himself or by the other workers. He warns the Lone Wanderer that he's trouble, and that they should be careful.

He's usually guarding in the catwalks in The Pitt Downtown.

Trouble Man appears only in the Fallout 3 add-on The Pitt.

Trouble Man's name is a reference to the 1970s film Trouble Man.

Retrieved from "https://fallout.fandom.com/wiki/Trouble_Man?oldid=3347372"
Community content is available under CC-BY-SA unless otherwise noted.