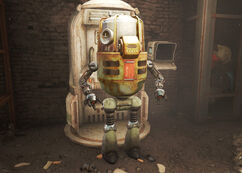 Trouble Brewin' is a side quest in Fallout 4.

The quest is received either by speaking to Rufus Rubins in Goodneighbor's Hotel Rexford, or from independently finding Buddy at the Shamrock Taphouse and interacting with him. When asking Rufus for work, he will ask the Sole Survivor to retrieve the Drinkin' Buddy, a protectron modified to function as a microbrewing machine, from the Shamrock Taphouse and bring it back so no one has to keep drinking the barman's normal swill.

There are raiders both inside and outside the Shamrock Taphouse. The raiders inside include a raider boss named Gaff located upstairs. There are also some radroaches in the kitchen closet and several mole rats down in the basement.

Buddy can be found in the basement, inside a protectron storage container, locked with an expert level security terminal. There is a note on Patrick's terminal that says he's stashed the password down in the basement – the password is on top of the shelves underneath a flashing red light. To reach it, either jump onto the shelves from the stairs leading down into the basement or hop up while pressing against the corner shelves.

One of the entries on Patrick's terminal indicates that the robot may be a bit frail and expresses concerns about transporting him to the buyer. However, this does not translate into the gameplay as Buddy will always arrive at his destination in one piece. The Sole Survivor will have to choose to either send Buddy to the Hotel Rexford as agreed with Rufus or to send him to one of their settlements. Escorting Buddy is not required and the player character may choose to fast travel to the final destination and meet Buddy there. The quest marker will not update until Buddy arrives in Goodneighbor.

When Buddy arrives at the Hotel Rexford, Rufus will express his admiration and pay the Sole Survivor the agreed-upon caps, completing the quest. Buddy will henceforth be established as the new bartender and the Sole Survivor will be able to ask him to tell them a joke, receive a daily batch of beer from him, ask him where to find additional recipes, or store any Gwinnett or Nuka beverage in him which will turn ice cold after 12-24 in-game hours.

If the Sole Survivor chooses to keep Buddy for themselves, the quest will not be completed until Buddy is sent to the Hotel Rexford. If Rufus is killed at any point before this, the quest will be marked as failed and removed from the quest log.

Retrieved from "https://fallout.fandom.com/wiki/Trouble_Brewin%27?oldid=3440986"
Community content is available under CC-BY-SA unless otherwise noted.
... more about "Trouble Brewin'"
RDF feed
Has platform
PC +, Playstation 4 +  and Xbox One +