View source
watch 24:51
Fallout Interactive Experience
Do you like this video?
Play Sound
The Pitt creature

The Pitt
“And the worst... well... just hope you never have to see 'em. They turn into animals. They forget who they are. They just eat, sleep, fuck, and kill.”— Wernher

Trogs are creatures in the Pitt in 2277.

Trog is the common name for humans that have become infected with the Troglodyte Degeneration Contagion (TDC). Trogs reside in the Pitt. Due to the contagion being endemic to the town, approximately 20% of the populace[1] have transformed into these wild, chattering monstrosities, hiding in darkness and attacking anything on sight. Study shows that children born in TDC-active areas virtually have a 100% degeneration rate and become feral within weeks of birth.[1] They will kill friends and loved ones.[2] They say lines like "Kill it!", "Meat!", "Hungry!", and "Food!" when attacking, and "Hurts!", "Pain!", and "Why?" upon being injured. Some can even be heard muttering "...peace..." or "Thank you..." right before they die.[3]

They will only spawn in the steelyard, power plant, and abandoned apartments; not in lit places such as Uptown. Trogs are weaker than standard humans; a basic trog is on par with a basic feral ghoul, and even the powerful trog brutes and savages are still only on par with standard raiders in terms of health. However, they are much faster than normal humans, have fairly powerful melee attacks, and rarely hunt alone.

These trogs are the smallest and weakest of the trog family. This type of trog will be encountered primarily at level 7 and below.

Regular trogs are much larger and stronger than trog fledglings but are still vulnerable to headshots from high-powered weapons.

Trog brutes are slightly larger than regular trogs but have almost double the health. Their attack is twice as powerful as their standard variants.

These trogs are the strongest and most powerful trogs in the Pitt. They are encountered rarely but are essentially trog brutes with slightly more health. Although only slightly tougher than trog brutes, trog savages have powerful melee attacks similar in damage potential to those of a giant radscorpion or mirelurk hunter.

Trogs appear in the Fallout 3 add-on The Pitt.

It seems that headshots do not work on all types of trogs, doing the same amount of damage as a shot anywhere else on its body. [verified] 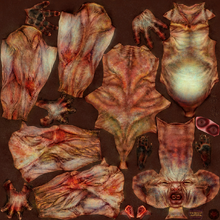