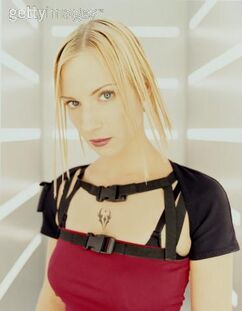 Trisha is a member of the Scorpion's Bite raider clan, and the girlfriend of Burk in 2253.

Trisha is a thief first and foremost. She disdains life in the towns and villages of the wasteland, finding such an existence boring and futile. Stealing, and the thrill of possibly being caught, adds the excitement to her life that she always seems to be missing. Hanging out with the wrong crowd of people also adds a level of adventure that she cannot find any other way.

Trisha is a bright young woman and is always on the lookout for the bigger better deal. She openly uses her youth and sexy body as tools to get her what she needs. She has traveled with several raider clans, used each for her personal gain, and then moved on when the time was right. She currently is with the Scorpion's Bite clan and is the girlfriend of their leader, Burk.

Trisha is trying to convince Burk to hand the Twin Mothers over to Caesar's Legion. She believes that this would elevate the status of the Scorpion's Bite in their eyes and score some serious rewards in the process. However, Burk has steadfastly refused to do so. This, of course, has not discouraged Trisha. It has simply convinced her that it may be time for her to take matters into her own hands and move on. She is working for Caesar's Legion. She will be killed by Burk if you tell him that she is working for the Legion.

If the player character sends a holodisk to the Caesar's Legion for her, she will offer money or sex as a payment.

Trisha has not appeared nor is she mentioned in any published game. She was to appear only in Van Buren, the canceled Fallout 3 by Black Isle Studios. It is not certain if she will appear in any future Fallout game.

Retrieved from "https://fallout.fandom.com/wiki/Trisha?oldid=3175934"
Community content is available under CC-BY-SA unless otherwise noted.