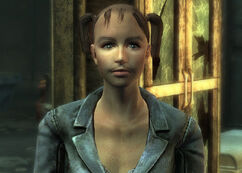 “Whoa! Why is the room spinning? You're nice. I can tell you a secret. I'm drunk. No, that's not the secret. I have another secret.”

Trinnie was, until recently, a resident of Little Lamplight. Sadly, she is completely wasted on alcohol and chems 24/7. She spends her days in the Muddy Rudder and then takes a break to go to A Quick Fix and "borrow" some chems. She then goes off to hide and enjoy the high for a bit before returning to the Muddy Rudder. Belle and Brock feel bad for Trinnie and let her sleep in their quarters. She's been known to turn tricks to get money, but she isn't forced to by Belle or Brock.[1]

Trinnie's medical information may be accessed from Doctor Preston's terminal in the Rivet City clinic.

Surprisingly healthy, apart from the alcoholism and other chronic dangers of her line of work. Guess they grow them strong in Lamplight.

She spends most of her time at the Muddy Rudder drinking and interacting with other non-player characters.

Giving her 25 caps for drinks will result in getting her drunk and opening a speech dialogue. She will tell you where Belle from the Muddy Rudder keeps a stash of caps: in a box under her bed.

Trinnie appears only in Fallout 3.

Retrieved from "https://fallout.fandom.com/wiki/Trinnie?oldid=3244653"
Community content is available under CC-BY-SA unless otherwise noted.