Trinity Tower is a location in the Back Bay neighborhood of Boston in 2287.

Standing at thirty stories tall,[1] Trinity Tower was one of Boston's tallest skyscrapers, located on the south side of Trinity Plaza in Back Bay. Trinity Tower was devastated by the Great War but remained standing, though it has been damaged further by the subsequent two centuries of exposure to the elements.[Non-canon 1]

Large sections of the building are noticeably absent, and the tower is infested by mutant hounds and super mutants. Despite this devastation, some computer terminals and elevators still function. Strong and Rex Goodman can be found at the top of the tower, held captive by the super mutants.

The first four floors are in the exterior zone. Enter the first floor (which features a cooking station) through the north or south doorways, and climb the stairs to the second floor. The third floor, accessed by another set of stairs, and the fourth floor, accessed by a ramp and including a balcony patio, contain only minor loot. Use the elevator on the second floor to ascend to the interior zone of the tower.

The interior zone includes four floors in the middle of the tower, with the elevator arriving on the second of these. The lowest interior floor may be accessed by dropping down the hole in the inactive elevator next to the working elevator; however, this lowest floor can only be exited by unlocking a Novice-locked terminal or picking the Advanced-locked door to the south leading to a ramp returning to the second interior floor. Significant loot containers in the interior zone include an Advanced-locked safe behind a desk near the elevators on the lowest floor, an Expert-locked safe under a desk in the southwest area of the second floor, and an Expert-locked safe in the southeast room on the third floor. An elevator on the fourth floor at the top of the interior zone ascends to the top of the tower in the exterior zone.

The top of the tower includes five floors, with the elevator arriving on the lowest of these. Significant loot containers at the top of the tower include an Expert-locked safe in the southeast room on the third floor and a steamer trunk on the fifth floor at the very top of the tower near the Master-locked cell where Strong and Rex Goodman are held; a weapons workbench is also on the fifth floor near the trunk. A window-washing elevator descends to a lower exterior floor, with a second window-washing elevator on the next floor down finally returning to the balcony patio on the fourth floor of the tower in the initial exterior zone.

Trinity Tower only appears in Fallout 4. It is also mentioned in a question in the Fallout Shelter weekly quest Game Show Gauntlet. 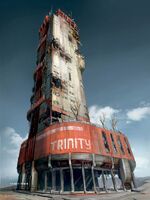 Concept art of the tower

Concept art of the first floor