The Triggermen are a loosely-connected group of independent organized crime syndicates that operate out of Goodneighbor. They share a common set of rules based around Boston's pre-War mafia families and their traditions. This appears to be due to the influence of their ghoul members, who claim to have been members of such organizations.[1] They favor style over subsistence and will usually wear a suit or other clothing typical to the pre-War era, sometimes alongside a fedora. Thus they usually stick close to their territory, only leaving to conduct dealings beneficial to their operations.

Most Triggermen appear to operate with a code of honor, unusual for criminals in the wastes, for example, Skinny Malone ordered that Nick Valentine be spared because of the "old times" when they fought with each other in the past. They engage in a variety of shady and sometime illegal enterprises, such as chem running and the robot racetrack at Easy City Downs. Mostly though, the Triggermen often work as hired guns for various high-profile individuals in the region, and can often be seen in the company of raiders and other such unscrupulous characters.

More evidence that the Triggermen are a loose consortium of similar gangs operating in the Commonwealth is that even leading figures like Mayor Hancock hire them to do tasks beneficial to them and the people they govern from time to time. Hancock allows the Triggermen to board in Goodneighbor as long as they do not get on his bad side. However eventually one gang may become too powerful and threaten the mayor's authority. That is when Hancock will have them shut down to protect Goodneighbor and his position as mayor.

A group of Triggermen can be seen in Easy City Downs with raiders, suggesting they cooperate. This is further evidenced by Sinjin's raider group which works with the Triggermen.

At the conclusion of The Big Dig, there are two Triggermen with Hancock's bodyguard Fahrenheit. This is probably why when Whitechapel Charlie asks the player to clear the warehouses in Goodneighbor which contain Triggermen, he doesn't want to tell you that Hancock is the one behind his request: Hancock is having members of a group killed, that he apparently works with from time to time. 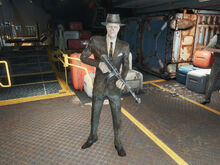 A ghoul Triggerman
Add an image to this gallery

Retrieved from "https://fallout.fandom.com/wiki/Triggermen?oldid=3134062"
Community content is available under CC-BY-SA unless otherwise noted.