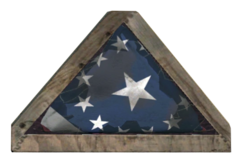 The trifold American flag is folded into a triangle and inserted into a wood box. On the front of the case is a shattered glass window, through which the flag can be seen. The undamaged flag has an intact glass window, a higher value and it also yields two additional cloth compared to the trifold variant.

Retrieved from "https://fallout.fandom.com/wiki/Trifold_American_flag_(Fallout_76)?oldid=3537914"
Community content is available under CC-BY-SA unless otherwise noted.