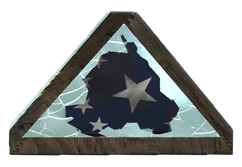 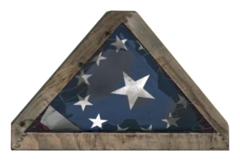 The trifold American flag is an American flag folded into a triangle and inserted into a wood box with a glass-like substance (that has since been shattered) on one side to allow the flag to be seen. It is sent to the families of those who served as a form of gratitude for their service, or to those who have lost a loved one during service.

The flag can be scrapped for two wood and four cloth. Because of the high weight value and small amount of common resources generated, the flag is a less desirable piece of junk to grab, and the weight could be better used for more exotic junk instead.

Undamaged: this pristine version of the trifold American flag can be found in areas that have not been touched by radiation, such as non-compromised vaults.

The trifold American flag can be broken down into its individual components for use in crafting:

Undamaged American flag
Add an image to this gallery
Retrieved from "https://fallout.fandom.com/wiki/Trifold_American_flag?oldid=3159487"
Community content is available under CC-BY-SA unless otherwise noted.