Tribals are generally groups with a primitive age lifestyle (although some exceptions exist), with their own beliefs, culture, customs and sometimes with their own language. Their identity is determined by culture and lineage rather than by geography. Only humans have seem to become tribal. Tattoos are common as one of their traditions, generally used to signify honors, victories or status more than just decoration. Many tribal cultures include the domestication of dogs.

Joshua Graham describes tribes as "families of families". Tribes, for the most part, avoid living in pre-War ruins and instead settle in small villages or rural areas. Pre-War cities and settlements are usually, but not always, avoided and are often treated as taboo. They usually have a religious or mythologized worldview, in contrast to the more cynical and scientific views held by city-dwellers. As a result, they often venerate places like Vault 13 or Zion Canyon that are significant to their history. This mystical worldview and their disconnect from the pre-War world have led to tribals being underestimated or even mistreated as they often appear backwards and uneducated. Members of tribes such as the Boomers and New Canaanites that do not fit the stereotype are often not regarded as tribals at all and are exceptions with the standard definition.

One tribal group appears in Fallout, located in southern California, the Khans. This band raider-tribals live their lifestyle on the mongol warriors. Two raider-tribal factions are also mentioned, the Vipers with their shamanistic nature and the Jackals with their savage and cannibalistic nature. They were both obliterated in time but their remnants appear in Fallout: New Vegas. They originated from Vault 15 with the Khans, and are culturally based upon early human cultures.

In Fallout 2, the Chosen One was born and begins his quest in the Arroyo tribe, as a tribal descendant of the Vault Dweller from Fallout. A potential companion Sulik is a tribal of the Primitive Tribe, seeking his sister, Kurisu, who was captured by a mysterious group. The Primitive Tribe lives on the coast of the Pacific Ocean in California (which they call the "Great Salt Water"), and they are one of the tribal groups which can be seen in random encounters while traveling through the coast area, they are extreme believers in the here-after and revere many spirits. Also, a cannibalistic tribe next to Arroyo can be met in random encounters, and therefore appear to be from Oregon. The Khans make a second appearance in as the New Khans. When the Vault Dweller massacred the Khans in 2161 the sole survivor Darion was corrupted by survivors' guilt, and over the next eight decades he devoted his life to rebuilding his tribe to its once former glory, but solely to get revenge on the Vault Dweller. Eventually the New Khans became a major raiding tribe and again based their lives on the Mongols like they once were and by 2241 they occupy Vault 15 which is also their original place of origin. Other tribals live around the Den, only seen during the slaver quests of Metzger, if the Chosen One is a slaver.

The Boomers are a group of tribals originating from Vault 34 and living in Nellis Air Force Base since 2231. They revere explosions and the discharge of weapons. The White Glove Society, the Omertas, the Chairmen and The Kings were all formerly tribals with other names before Mr. House enlisted their help, making the first three more civilized and gave each of them control of different areas of the New Vegas Strip. The last group known later as the Kings were moved to Freeside but abandoned their tribal culture eventually. An old abandoned tribal village can be found north of Goodsprings. The Great Khans are a raider tribal gang based at Red Rock Canyon. They originated from California but migrated to the lawless Mojave to escape the NCR. They live in tents and are based on the mongol warriors. Many also are involved in making and moving various chems. There are also the Fiends though not considered tribals and just raiders, they share many tribal customs such as splintering into small bands, wearing tribal style cloths, and like many other tribes turning cannibalistic. There are two other raider tribes in the Mojave, the Jackals and the Vipers. Both migrated from California and into the Mojave away from the NCR and Brotherhood of Steel. They were both a once feared tribe across California but since the NCR and Brotherhoods war against them they have been reduced to just petty raiders tribes. The add-on Honest Hearts introduces four tribes from Zion Canyon and the surrounding area: the New Canaanites, the Sorrows, the Dead Horses and the White Legs. A territorial raiding tribe known as the 80s are also mentioned in the add-on. Also mentioned are the Tar Walkers and Crazy Horns, both of which had gotten wiped out. The New Canaanites, Sorrows, Dead Horses, White Legs, 80s, Tar walkers and Crazy horns are all based in Utah not the Mojave in Nevada

There are some groups of tribals living in Midwest region, and are usually friendly folk. Three missions in Fallout Tactics involve visiting a place with a tribe: Dirt Haven tribe (only in the demo), are a peaceful people who live in a small village north of Chicago. There leader is called the Town father and their shaman is called Salik. Brahmin Wood tribe, are a wealthy tribe who worship Brahmin gods. They live in a large village west of Chicago. Their leader is tribal father Charon, and their shaman is Hawkeye. The last peaceful group, the Peoria tribe live near the remains of Peoria. The people who live there are Whachutu tribals. Their leader is Chevron the tribal father, and their shaman is Dhal. Also, one raider-tribal faction that the Warrior has to defeat, called Beastlords, are a people who have a unique mutation, allowing them to take control over animals. Their leader is Daarr.

Cyrus is know to have grew up in a semi-tribal farming community, with an important reverence for tattoos. This community had its share of problems with raiders, radscorpions, and the like, but was finally devastated by the remains of the Master's Army when he was just a boy, sometime after 2162.

Sorrows in Zion Canyon with Daniel, a New Cannanite in Honest Hearts 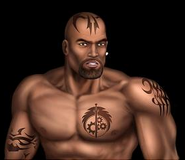 Retrieved from "https://fallout.fandom.com/wiki/Tribals?oldid=2420321"
Community content is available under CC-BY-SA unless otherwise noted.